Seen side by side, it’s clear that the original image has been, to put it mildly, somewhat obfuscated by the sampling process. 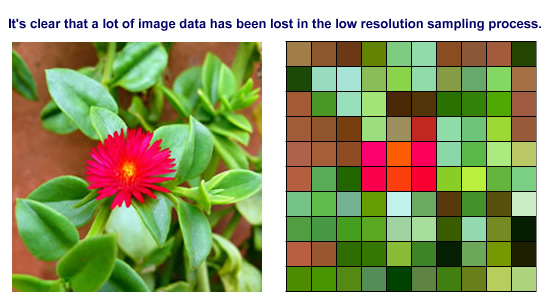 Although in our example the difference is very noticeable, the loss of definition is an inevitable part of the image sampling process, no matter how fine the resolution. However, the fact is that the human eye is only capable of so much distinction, both of detail and of colour. In fact we fool our eyes all the time with any screen image by simply changing the screen more quickly than our eyes can detect, even when the image is apparently still. This gives some leeway when it comes to choosing a sample resolution for an image.

We’ll come back to that later in the article, but for now we’ll take a look at these two images at a much reduced size.

Digital image capturing devices such as scanners, digital cameras and digital camcorders are designed to be used with this knowledge in mind. Essentially, when sampling a very large image that is going to be shown in a smaller form, the sampling resolution need not be so high. If, on the other hand, a relatively small image is going to be blown up to a larger size, then the sampling resolution needs to be as high as possible. Otherwise, when the image is expanded, the pixelation seen in the above images will occur, and there’s very little that can be done about it. However, don’t forget that there is only so much detail that a human can use, and oversampling leads to bloated files full of data that is more or less invisible.

So, we now know how to sample an image, and in the next installment we’ll start to look at how the colours are turned into numbers.

The demand for skilled cyber security professionals is growing as well as a number of threats and risks. Any company needs an expert or team to … END_OF_DOCUMENT_TOKEN_TO_BE_REPLACED

Did you know that we create about 2.5 quintillion bytes of data every single day? There is no denying the fact that big data is changing our world in … END_OF_DOCUMENT_TOKEN_TO_BE_REPLACED

Canva is a very popular design software that is used by over 55 million designers. It is a robust application, but it can be tricky for beginners to … END_OF_DOCUMENT_TOKEN_TO_BE_REPLACED

Cricut Design Space is one of the best digital design applications for people trying to create projects for Cricut projects. You can create a lot of … END_OF_DOCUMENT_TOKEN_TO_BE_REPLACED

Computer viruses are obnoxious programs that can wreak havoc on even the most sophisticated machines. The good news is that people will be better … END_OF_DOCUMENT_TOKEN_TO_BE_REPLACED

Adobe Illustrator is one of the most popular design tools available. The tool has been around since 1987 and is used by over 90% of the world's … END_OF_DOCUMENT_TOKEN_TO_BE_REPLACED

PROS: Nova Backup is a powerful tool that is also very easy to use. CONS: It's a bit complicated for the standard non savvy computer user. With … END_OF_DOCUMENT_TOKEN_TO_BE_REPLACED