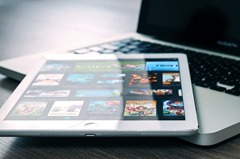 The new iOS for the iPad is coming soon. This new OS will contain several updates and changes to the iOS that many people have been waiting for with anticipation. It is coming soon to all of Apple’s mobile devices, but the changes that are on tap will benefit the iPad a great deal. Here are a few changes to look forward to.

There’s a minor change in the typography, where Apple has replaced the ‘Helvetica Neue’ system font with a font called ‘San Francisco’. Apple also deploys its typography in a clearer way, with more space around the lettering. Although these are subtle changes, the new font should be easier to read as well as remaining easy on the eye.

Following complaints from users, Apple has made a small modification to its ambiguous Shift key system. The former version is hard to use, since only a change in the Shift key’s color indicated the letter’s case change – when it’s on, it looks off and when it’s off, it looks on. When you press the new Shift key, however, all the letters on the screen will change to uppercase. This will put an end to the frustration at having to delete letters because you mistakenly type an uppercase letter instead of a lowercase one, and vice versa.

Apple has revealed a number of new features in the WWDC, and has released a public beta of iOS 9 for developers to test drive its capabilities. Here are some of the new features that Apple users can benefit from.

When will it be available?

For Apple fans, and especially iPad users, the new features alone in iOS 9 are worth waiting for. The first public beta testing version of iOS 9 is available now, and Apple will most likely release the final version of the software in September 2015.

Risk management is about identifying, assessing, evaluating, and prioritizing risk. Although risk management has been practiced in some ways since … END_OF_DOCUMENT_TOKEN_TO_BE_REPLACED

More parents are using technology to keep their children safe. One survey from Pew Research in 2016 showed that 30% of parents use technology to block … END_OF_DOCUMENT_TOKEN_TO_BE_REPLACED

We talked about the reasons that you need to monitor in machine learning in our last post. We are now clear about the main factors that can degrade … END_OF_DOCUMENT_TOKEN_TO_BE_REPLACED

The information technologies have led to the development of Big Data and helped it grow at a large scale. Big data offers a number of promising … END_OF_DOCUMENT_TOKEN_TO_BE_REPLACED

VBA is a powerful application that offers a lot of versatility in Microsoft Office applications such as Word and Excel. In this article, we are going … END_OF_DOCUMENT_TOKEN_TO_BE_REPLACED

Imagine a newspaper that sits neatly in your pocket, is environmentally friendly and gets updated every day. That's the dream that Toshiba … END_OF_DOCUMENT_TOKEN_TO_BE_REPLACED

In these strange times, watching shows online is more important than ever. In March, a study found that Internet usage had increased 70% since the … END_OF_DOCUMENT_TOKEN_TO_BE_REPLACED

RecipeSeach Toolbar is a plugin for your browser that comes from the Mindspark family of toolbars. This plugin may be a risk to your computer, so it … END_OF_DOCUMENT_TOKEN_TO_BE_REPLACED