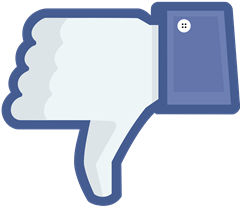 The dislike button is finally coming to Facebook. Many people have been asking for this for years. But, businesses are facing the news with some trepidation. Many businesses have built their reputations and profits on Facebook and they are concerned how the dislike button can impact them. Here are some things you need to know about the Facebook dislike button and how it can affect your business.

For many years people have been clamoring for a dislike button on Facebook. But up until now, perhaps the world was not ready. According to research from Piper Jaffray and the Pew Research Center, the demographics of Facebook users have changed dramatically over the past decade. While 10 years ago the world’s most popular social media platform was frequented mostly by teenagers and early 20-somethings, today over 60% of Facebook users are over the age of 25. And you may have noticed that this change of user is reflected in the posts you likely see in your news feed. While users once posted more pictures of parties, now you’re more likely to see pictures of babies, news articles, or political stories.

So, why does this age difference matter? According to Facebook’s CEO, Mark Zuckerberg, he didn’t want the social media network to turn into a forum where “people are voting up or down on people’s posts.” This could quite possibly have been the outcome had Facebook introduced a dislike button while it had a younger fan base.

Will Users Be Able to Dislike A Business?

It is highly unlikely this will happen. Remember, Facebook is a publicly traded company that aims to turn a profit. Advertisers and brands would not be too happy if their ads or businesses were suddenly disliked, and Zuckerberg is undoubtedly aware of this.

What is the Purpose of a Dislike Button?

To clarify, Zuckerberg never directly came out and said Facebook is getting a dislike button. Instead, he said they are working on a new button that will express sympathy or empathy. And with a now-older user base that’s more likely to share emotive news stories or sad news about family matters, it makes sense for a button like this to be introduced now. Here’s what the Facebook CEO had to say about the new button: “Not every moment is a good moment, right? And if you are sharing something that is sad…like the refugee crisis that touches you…it might not feel comfortable to Like that post.”

Be Careful Of People Already Offering the Dislike Button

Be aware that a dislike button is not available now. While you or your employees may see ads from third parties offering early access to the “dislike button”, do not be fooled by them. If you are tricked into installing or signing up for them, you could risk your computer being infected with malware.

Did you know that there are 66,200 computer engineers in the United States? This can be a very lucrative career path. However, you may have an easier … END_OF_DOCUMENT_TOKEN_TO_BE_REPLACED

We recently published a post on the importance of defragmenting a hard drive. We wanted to cover the actual process in more depth. The first thing … END_OF_DOCUMENT_TOKEN_TO_BE_REPLACED

Your computer's hard disk of is one of the most vital parts of your machine. It needs to operate reliably and quickly for your computer to function … END_OF_DOCUMENT_TOKEN_TO_BE_REPLACED

VMs and containers are two implementations of virtualization technology. This means that both VMs and  containers help to optimize how resources … END_OF_DOCUMENT_TOKEN_TO_BE_REPLACED

New technology makes it easier than ever to capture images and videos. This technology is getting smaller and easier to use. As a result, the quality … END_OF_DOCUMENT_TOKEN_TO_BE_REPLACED

The demand for skilled cyber security professionals is growing as well as a number of threats and risks. Any company needs an expert or team to … END_OF_DOCUMENT_TOKEN_TO_BE_REPLACED

Hackers aren't just going after business owners. They are increasingly attacking consumers, as well. In December, the New York Times reported that … END_OF_DOCUMENT_TOKEN_TO_BE_REPLACED

The online programming industry is lucrative and growing rapidly. In the United States, programmers ear over $100,000 a year. Qualified experts are so … END_OF_DOCUMENT_TOKEN_TO_BE_REPLACED

The issue began on the password length, when there has been an announcement on the eBay administration that the fixed password they would be accepting … END_OF_DOCUMENT_TOKEN_TO_BE_REPLACED