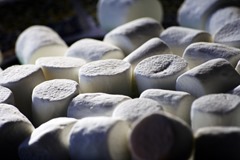 The rumor mill has been churning for some time now about the release of the latest and greatest Andoid operating system. Well, its time has finally arrived, and it will be known as Marshmallow.  It follows in the footsteps of previous foodstuff-inspired Android operating system releases, including its predecessor Lollipop. Though the Developer Preview of Marshmallow is now available, there’s no confirmed release date as of yet for the full version of the system for use on devices – but here’s what to expect when it does come.

Marshmallow was first announced at the Google I/O conference earlier this year, but it’s taken a while for a version to come through that’s ready for developers to get their hands on. However, that’s now happened, and the first publicly available release of the operating system is expected to be on the new Nexus 5 and 6 mobile devices in the coming weeks. Sadly, the rest of us are unlikely to have a crack at Marshmallow until the end of 2015 at the earliest. But when that time does come around, it’s packed with these developments.

No more dialing voicemail and listening for long-winded prompts – Marshmallow is set to offer visual voicemail functionality from right within the main phone app. That means you can see at a glance who has left you a message, listen to each voicemail, and quickly hit a button to get more information or call or text back – all without needing to wait for a long list of options to play out first. Since this feature requires work at the carrier’s end to enable compatibility, it’s expected to be available only on a handful of networks to begin with – but the list should grow as time goes on.

Here’s something that competitor Apple has offered its users since even the earliest iterations of its devices – the simple ability to rotate the screen and use it in landscape as well as portrait view. It’s a wonder it’s taken Google this long to realize this was a big and frustrating gap in the Android’s functionality, but at least the wait is over. You’ll now be able to rotate the screen whether you’re on the home screen or deep in an app.

Easier to Use App Bar

Previous releases of the Android operating system have switched up Apple’s conventional single-level, horizontal-scrolling app drawer – used for accessing apps that are already open – with a bigger and vertical-scrolling drawer. But until now this has been plagued by bugs and apparently poorly-thought-out design, with out-of-place alphabetical organization and an ineffective use of space. Marshmallow sees these fixed, with space for more icons on screen – meaning faster and simpler scrolling – and floating alphabetical icons that both save space and look cleaner.

The demand for skilled cyber security professionals is growing as well as a number of threats and risks. Any company needs an expert or team to … END_OF_DOCUMENT_TOKEN_TO_BE_REPLACED

Did you know that we create about 2.5 quintillion bytes of data every single day? There is no denying the fact that big data is changing our world in … END_OF_DOCUMENT_TOKEN_TO_BE_REPLACED

Canva is a very popular design software that is used by over 55 million designers. It is a robust application, but it can be tricky for beginners to … END_OF_DOCUMENT_TOKEN_TO_BE_REPLACED

Cricut Design Space is one of the best digital design applications for people trying to create projects for Cricut projects. You can create a lot of … END_OF_DOCUMENT_TOKEN_TO_BE_REPLACED

Computer viruses are obnoxious programs that can wreak havoc on even the most sophisticated machines. The good news is that people will be better … END_OF_DOCUMENT_TOKEN_TO_BE_REPLACED

Adobe Illustrator is one of the most popular design tools available. The tool has been around since 1987 and is used by over 90% of the world's … END_OF_DOCUMENT_TOKEN_TO_BE_REPLACED

At first glance, a DVD disc can easily be mistaken for a CD: both are plastic discs 120mm in diameter and 1.2mm thick and both rely on lasers to … END_OF_DOCUMENT_TOKEN_TO_BE_REPLACED

EaseUS is one of the most reliable data recovery, data backup and data partitioning software publishers on the market. They created a free data … END_OF_DOCUMENT_TOKEN_TO_BE_REPLACED