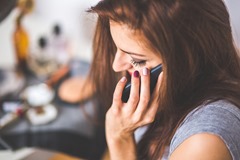 Its coming. The new phone from Microsoft, the Luma 950 is due any time now. This will be the flagship Windows phone and Microsoft will be unveiling it at its annual event on October 6th. Microsoft is working hard to become a player in the smartphone market and they have gone out of their way to make the Lumia 950 something to be recognized. They are trying to evolve to be a recognized contributor in the industry.

This will be the first phone to feature their Windows 10 operating system on a mobile device. The Lumia 950, code name Talkman, is expected to be released shortly. There are many secrets, but here are a few things we know.

Rumor has it that the latest Lumia 950 will come with a metal frame, coated with matte white or black polycarbonate, with a thickness of just 8.89mm thickness. The device will sport a 5.2-inch screen display, with a Quad HD resolution of 2,560 x 1,440 pixels.

The Lumia 950 is going to boast a 64-bit Hexa core, most likely the Qualcomm Snapdragon 808 processor, as well as 3GB of RAM and an internal storage capacity of 32GB. Users have the option of expanding the memory with a microSD card.

It is said that Microsoft’s new Lumia 950 will incorporate Qualcomm’s Quick Charge 2.0 technology, allowing for faster battery charging (up to 60% within just 30 minutes). The Lumia 950 will be equipped with a detachable 3,000mAh battery, so you can expect it to last for a full day, even with heavy use.

When and How Much?

Although Microsoft hasn’t yet revealed the exact price or a release date for the upcoming Lumia 950, the price point is expected to rival that of the iPhone 6s. The release date is most likely to be on October 10, the very same day Microsoft plans to launch its brand new operating system for smartphones, Windows 10 Mobile.

Risk management is about identifying, assessing, evaluating, and prioritizing risk. Although risk management has been practiced in some ways since … END_OF_DOCUMENT_TOKEN_TO_BE_REPLACED

More parents are using technology to keep their children safe. One survey from Pew Research in 2016 showed that 30% of parents use technology to block … END_OF_DOCUMENT_TOKEN_TO_BE_REPLACED

We talked about the reasons that you need to monitor in machine learning in our last post. We are now clear about the main factors that can degrade … END_OF_DOCUMENT_TOKEN_TO_BE_REPLACED

The information technologies have led to the development of Big Data and helped it grow at a large scale. Big data offers a number of promising … END_OF_DOCUMENT_TOKEN_TO_BE_REPLACED

VBA is a powerful application that offers a lot of versatility in Microsoft Office applications such as Word and Excel. In this article, we are going … END_OF_DOCUMENT_TOKEN_TO_BE_REPLACED

Dota 2 is one of the most popular multi-player online combat games. It had an average player count of 485,000 throughout most of 2018. The peak number … END_OF_DOCUMENT_TOKEN_TO_BE_REPLACED

The Ryuk computer virus is to blame the Jerez City Council having to make a journey back in time. This is the name of the computer virus that has … END_OF_DOCUMENT_TOKEN_TO_BE_REPLACED

Software to facilitate the digitalisation of analogue music is increasingly widely available. The Windows Sound Recorder is not suitable, since it … END_OF_DOCUMENT_TOKEN_TO_BE_REPLACED